The Photovoltaic multi-span with combined roof is specially designed to support photovoltaic panels on the straight part of the roof, and the rest part of the roof could be installed by flexible or rigid covering material. In this greenhouse model are also available zenithal and sides ventilations and the other auxiliary accessories as for the rest of ININSA models.

The main advantage of this model is that agricultural production and electrical energy are produced simultaneously, thanks to the photovoltaic panels placed on the part of the roofs. The energy obtained can be used in the greenhouse automatisms (motors, lights, equipments) besides of selling the surplus energy to electrical companies. 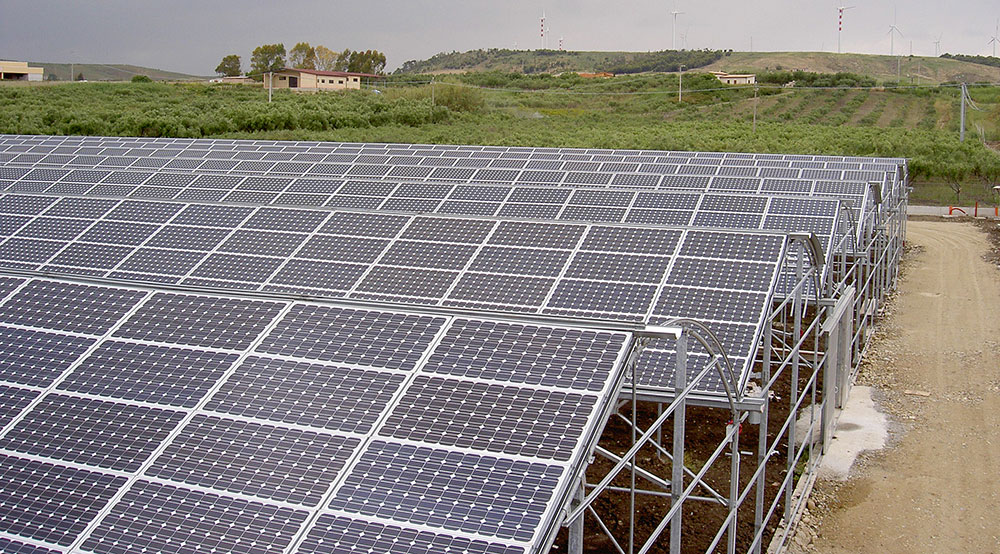 The Photovoltaic P-9FV greenhouse model has its framework completely hot-dip galvanized with zinc cover to prevent oxidation to high humidity inside. The assembly of this model is made without welding, so we will use a bridle joint strengthened by screws. This type of structure allows us to enlarge, both on lateral and frontal side, the greenhouse later throughout attaching new ININSA structures, with no need to dismantle the existing ones.

We offer a special type of zenithal ventilation for this greenhouse model that is called “Super-zenith Plus FV”. This window could be installed in every bay, even in alternating way. The opening system can be automated by a switchboard, climate controller and sensors. In relation to ventilation on the perimeter area, types of coverings and other equipments, the Photovoltaic P-9FV model has the same possibilities as the previous models.

Each project designed by ININSA has a personal treatment, depending on the specific parameters of the work (growing requirements, power desired in the installation, size of the photovoltaic panels, area situation, etc.). According to the size of the chosen photovoltaic panels for the project, we can also adapt the standard greenhouse structure to it, allowing us to adjust MW/m² ratio to the customer needs.

As an example, ININSA has already installed Photovoltaic greenhouse models “P-9FV” and “P-9’60FV” in several regions as Calabria, Lazio and Veneto in Italy, and Marseille in France.

You could be also interested in the other greenhouse models by ININSA:

Use this form to find things you need on this site

You can add any HTML here (admin -> Theme Options -> Promo Popup).
We suggest you create a static block and put it here using shortcode